10 Reasons You Don’t Have A Food Addiction, Backed By Science

Is food addiction actually a thing? Let’s take a look.

Food addiction is a phrase that has become more common in recent years.

This is, in part, because our understanding of addiction has got better, from both a behavioural and neural perspective.

That’s on top of the startling increase in obesity in recent decades.

In an attempt to understand the causes of obesity, some scientists are now investigating whether we’re getting addicted to certain foods available on supermarket shelves.

But are we really addicted to food?

1. There’s no universally accepted definition of what food addiction is, or how we measure it

Food addiction is a term first used in the 1960s, and it was suggested that foods like milk, eggs and potatoes may have ‘addictive properties’.

More recently, researchers have investigated the similarities between how we eat (and the reward we feel when we eat) and drug addiction.

Drug addiction is defined as a disorder with symptoms including drug-seeking behaviour, loss of control to limit intake and a negative emotional state (like anxiety or irritability) when the drug is taken away.

One study found that changes in central nervous system signalling occur and involve chemicals with rewarding properties when it comes to addiction. These chemicals can be released by external substances (such as drugs) but also by our own behaviour (such as gambling).

As some (mostly tasty) foods can make the food reward parts of the brain light up like a Christmas tree, it’s an attractive hypothesis to say this is a sign of addiction.

But, in reality, it’s not obviously clear that we can be addicted to certain foods just because we enjoy eating them.

The Yale Food Addiction Scale is used to assess food addiction, based on criteria for other substance dependence, such as drug addiction. It uses 25 questions to assess eating habits over a year, and lists tasty foods like ice cream, chocolate, doughnuts, sweets, fizzy pop etc.

In other words, the tasty stuff.

But, although they all have this in common, the differences between them could make the diagnosis of ‘food addiction’ slightly trickier…

2. We don’t know what foods we could be addicted to

When people discuss food addiction, they generally focus on the idea that we’re addicted to a substance in foods.

Some people focus on sugar. People are adamant that we’re addicted to sugar, and that sugar is the cause of obesity.

Other people think we’re addicted to fat, and use mouse studies to back it up.

There’s even a (fairly limited) argument for salt addiction, in some cases.

And this is probably where the Yale Addiction Food Scale I mentioned earlier falls down slightly – it doesn’t help us identify which substances we might be addicted to.

For example, one poll showed that only 20% of the British public eat five portions of fruit and vegetables per day.

Clearly we’re not addicted to ALL food.

The question is, what are the substances in certain foods that we might be addicted to?

Are there other reasons that these are the foods we want to eat?

3. We are hardwired to look for food

This is quite a big consideration for the food addiction argument. Humans, like other animals, are hardwired to seek certain things.

Like the need to reproduce, a place that makes us feel safe or physical comfort. Along with these things, we need food and water for basic survival.

Seriously though, all of those things tell the brain they are valuable foods, high in calories. This was crucial for our ancestors survival.

Some research suggests that even after we feel full eating one type of food, we can still seek other types of foods – come on, we’ve all been stuffed after dinner but then found room for dessert!

This is known as sensory-specific-satiety; feeling full but only to foods that have the same properties (like salty foods).

Likewise, some biologists believe we seek food that’s as high in calories but doesn’t take much effort to find (er, back to that Dominos?) – a concept called the optimal foraging theory.

Therefore, it’s unlikely food addiction is the issue but the evolutionary drive to seek out food to avoid starving.

The only difference is that, in the today’s world, we often have easy access to the food we want, without having to expend many calories to get it.

4. Your cravings disappear when you have access to food (and eat it)

Research has shown that when rodents are deprived of sugar and then given access to it, they show ‘addiction-like behaviours’.

This is seen as ‘evidence’ that food addiction may exist in humans too.

However, it’s worth noting that when the rats are given ad libitum access to sugar (the freedom to eat as much as they desire, much like us humans have), they don’t show addictive behaviour.

Interestingly, when rats are given their normal meals (chow) alongside intermittent sugar feedings, they eat less chow to compensate for their sugar intake – this helps to stop weight gain.

If we limit nice foods, it’s generally only a matter of time before we announce that we ‘crave’ the food that we’re restricting and must, MUST have it.

Think of all the people that you know who said they’d give up chocolate – and how it lasted about two days.

We often think we might be ‘addicted’ to a certain food, based on our cravings for it.

We also often restrict eating nice foods to try and control our weight and health. This makes that sexy bar of fruit and nut even more appealing, and it pre-occupies more of our thoughts.

But, the thing is, food cravings differ dramatically to drug cravings.

Importantly, the duration, intensity and frequency of food cravings are all completely different.

Food cravings don’t last long, and often cease after a few hours or if we can distract ourselves. This isn’t true with drug cravings – they increase in intensity, duration and frequency if the user goes cold turkey. 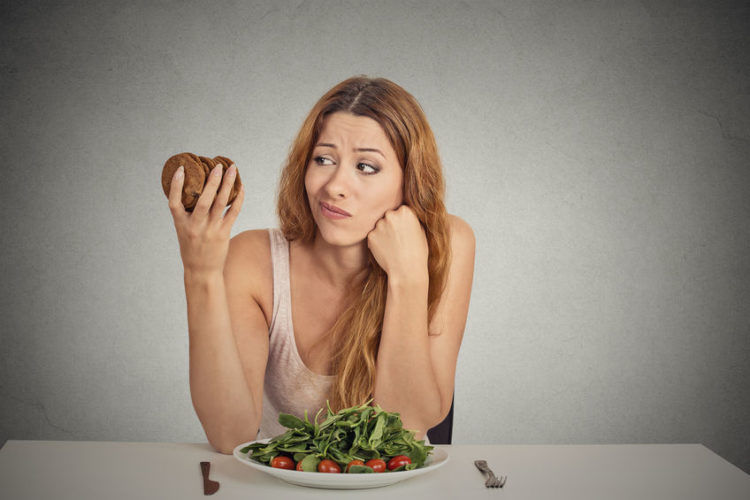 Food devaluation involves the addition of a substance that will induce sickness, to see whether it is still sought out.

For example, when rats are given addictive drugs that are laced with something that makes them nauseous, they will continue to seek out the drugs, despite being sick.

However, if you do the same with food, rats will stop eating.

This does indicate that if we’re able to develop an addiction to food, it’s very likely that it isn’t a particular substance in food that we’re addicted to.

6. You don’t sell your possessions to buy food

On a more practical note, let’s think about comparisons between addictive drugs and ‘addictive’ food substances, like sugar.

It is not uncommon to hear stories in the media of strange and terrible things that people will do to facilitate their drug dependencies.

People sell their bodies, steal money from friends and family and rack up large amounts of debt.

The estimated cost of crime related to drug addiction is £13.9 billion.

The average heroin user spends £1,400 per month on drugs – more than 2.5 times the average mortgage.

All in all, it’s clear that people will go to great lengths to get access to the drugs they are addicted to.

The question is – how many people do you see doing that for a bag of Tate and Lyle?

How many people are selling their possessions, running up debts, wasting savings?

Throwing it all at sweets and cans of coke?

Because we’re not addicted to substances in food.

My point? Even after ALL of the arguments I’ve presented to you for food addiction, it may not matter or apply to you anyway.

Because, if you’re reading this, then I’m going to take a giant leap and presume that you’re not a rat.

That might be dangerous territory in the social media age (there’s probably someone, somewhere, going absolutely mad that I’m depriving them of their right to self-identify as a rodent, and who am I to assume their species, etc etc.) but, when it comes to food addiction, the most convincing research we have is in rat models.

And even that research isn’t the most convincing.

A lot of the research on rats showing addiction-like behaviour only does so because of the specific study environment – if you deprive rats of sugar intermittently, they’ll eat more when they have access to it.

8. Even if you were a rat, the evidence in rats isn’t completely convincing

EVEN THEN you’re not likely to be addicted to food.

There is no overwhelming research that shows rats are addicted to food. In fact, there’s a fair amount of research which shows that they might not be.

As I mentioned earlier, one area of research against food addiction is the devaluation of food.

Another study shows that when you put sugar in water, rats will drink more – but only up to a point.

When sugar concentration gets beyond a certain point, they will actually drink more plain water than sugared. If sugar was addictive, then rats would continue to drink more of the sugar water, even if the concentration is increased.

9. What benefit would we gain from branding people as having a food addiction?

If we were to establish a definition for food addiction, would it be helpful?

For one, researchers suggest that if we were addicted to food, it wouldn’t really change much in terms of health policy.

Eating more calories than you expend would still cause obesity.

A further argument would be that it will leave people feeling powerless when trying to limit energy intake, lose weight or prevent weight gain.

The research on food addiction is currently very limited – it’s unlikely it’ll be helpful to start describing, diagnosing and treating food addiction until there is a clearer picture of exactly how (or whether) food addiction may occur.

A behavioural addiction is much more likely than a particular food substance addiction.

There’s a fairly convincing case that it’s unlikely we’re addicted to particular substances in food, and that ‘food addiction’ is probably not an accurate description.

However, an argument for ‘eating addiction’ has been made.

If we look at the rise of obesity over the past few decades, many people will point out that sugar intake has increased.

But if we look at other data, so has our fat intake.

It’s clear that we’re not just addicted to eating one particular food source.

We overeat the nicest tasting food – the foods that have the right combination of sugar, fat and salt.

Eating addiction may be a better fit as it avoids a focus on individual substances and recognises the difference between behavioural and substance addiction.

So there it is.

There isn’t really enough research to suggest that we’re addicted to certain types of food, or eating in general.

Charlie is the owner of CB Nutrition, and a nutritionist with an MSc in Sport and Exercise Nutrition from Loughborough University. He has worked with athletes in a variety of different sports, as well as people looking to lose weight, build muscle or just optimise their health.